Significance of the Pineal: Galactic Orientation

The Pineal gland serves much as an internal and external homing device.  While keeping us oriented in our ever changing position in the solar system, the galaxy and the cosmos in general, it also keeps us oriented in Source within the vibrational context of what Gregg Braden calls the “Divine Matrix” and what David Wilcock calls the “Source Field” in his recent release The Source Field Investigations — both authors providing insight into the cosmic context for today’s chaotic world in transition to a “Golden Age.”  Gold is the symbol of love, and so does the Pineal pulsate with the vibration of love.

We are considering the role and significance of the Pineal gland during this shift our solar system is presently experiencing as it crosses over the threshold of the galactic equator and into the birth canal of our Milky Way Galaxy, where star systems are born and reborn.  Our solar entity is being reborn, its energetic frequency being up-regulated. This is the final installment on the theme which I’ll bring to a close with this excerpt from my book Sacred Anatomy.

A Time of Radical Transformation

Anthropologist, historian and investigator, Carlos Barrios, of Spanish descent, was brought up alongside the indigenous Maya Mam tribe in Huehuetenango in the highlands of Guatemala.  In exploring the many different Mayan calendars and the stories they contain, he unveiled a number of inaccuracies in the interpretations anthro-pologists who visit the temple sites have made.  For example they imagined the implications that the world would end rather than go through a transformation, the more accurate interpretation by the Mayan elders, who alone know how to read the calendars.

Carlos’ investigations uncovered a legend which has it beginnings in a time prior to the arrival of Hernando Cortez and his fleet of  Spanish galleons from the East at what is today called Vera Cruz, Mexico, on Easter Sunday in 1519.   The ships with their billowing sails resembled butterflies skimming the ocean surface, and their arrival marked for the islanders the return of a very important ancestor, whose return was prophesied to be as one “coming like a butterfly.” This marked the beginning of a new era the Mayans had anticipated through their calendars, which they termed the “Nine Bolomitkus, or nine Hells of 52 years each.”

“As the nine cycles unfolded, land and freedom were taken from the native people.  Disease and disrespect dominated. What began with the arrival of Cortez lasted until August 16, 1987 – a date many people recall as Harmonic Convergence.  Millions of people took advantage of that date to make ceremony in sacred sites, praying for a smooth transition to a new era, the World of the Fifth Sun.

From that 1987 date until now, Mr. Barrios says, we have been in a time when the right arm of the materialistic world is disappearing, slowly but inexorably.  We are at the cusp of the era when peace begins, and people lie in harmony with Mother Earth.  We are no longer in the World of the Fourth Sun.  This is the time in-between, the time of transition.

As we pass through transition there is a colossal, global convergence of environmental destruction, social chaos, war, and ongoing Earth changes.  All this, Mr. Barrios says, was foreseen via the simple, spiral mathematics of the Mayan calendars.   “It will change,” Mr. Barrios observes.  “Everything will change.”    He said Mayan Daykeepers view the Dec. 21, 2012, date as a rebirth, the start of the World of the Fifth Sun.  It will be the start of a new era resulting from and signified by the solar meridian crossing the galactic equator, and the earth aligning itself with the center of the galaxy.

At sunrise on December 21, 2012, for the first time in 26,000 years the Sun rises to conjunct the intersection of the Milky Way and the plane of the ecliptic .

This cosmic cross is considered to be a embodiment of the Sacred Tree, The Tree of Life, a tree remembered in all the world’s spiritual traditions.   Some observers say this alignment with the heart of the galaxy in 2012 will open a channel for cosmic energy to flow through the earth, cleansing it and all that dwells upon it, raising all to a higher level of vibration. 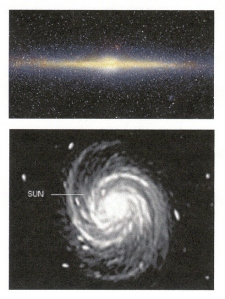 This process has already begun, Mr. Barrios suggested.  “Change is accelerating now, and it will continue to accelerate.”  If the people of the earth can get to this 2012 date in good shape, without having destroyed too much of the Earth. . . we will rise to a new, higher level.  But to get there we must transform enormously powerful forces that seek to block the way.

We are living in the most important era of the Mayan Calendars and prophecies.  All the prophecies of the world, all the traditions, are converging now.  There is no time for games.  The spiritual ideal of this era is action.”  (From an article taken off the internet.)

This all relates to the transformation process underway in our body temples occasioned by vibrational shifts that are occurring in our immediate vicinity of the Milky Way Galaxy. The action needed is not physical or mental but spiritual or vibrational in nature.  “Not by power or by might, but by my spirit, saith the Lord of hosts.”   It is as we actually express the Spirit of Love that we know love and experience transformation and renewal.   It is only as we start being peaceful ourselves that we bring peace to our world.

As these heavenly bodies change their proximity to one another and approach conjunction, the vibrational lines of force in the Earth change and intensify, including the vibrational intensities of these seven endocrine centers, which form the “Tree of Life” in these body temples.  When these change, all the cells of the body temple undergo change accordingly.  This impacts the mind as well and the speed at which thoughts form and then materialize bringing us to a point where spontaneous creation is not only possible but a daily occurrence.

The vibratory intensity of the emanations of spirit  through the Pineal  into the body temple increases creating more powerful hormones than we knew were possible to our endocrine system.  With its hormones it is striking at the very foundations of this world founded on fear, hate and greed.  This little stone is one that is not cut out or produced by human hands.   It is a gift from God and is therefore sacred.  It is the “secret place of the Most High” which has been established for His covenant with men.  The Pineal connects us with Heaven above and Earth beneath our feet.  It connects us with Source, the “Divine Matrix” of the Universe of which we and our world is but a physical manifestation.

This Seventh Level of Being is the highest level of attainment of union with the divine here on earth.   In The Triune Ray, Uranda describes it as the point of radiant action:

“The highest, or seventh, plane was, and is, the Christ vibration, which means that it is that which is the purely active radiation of the Divine, or God, Beings who are creating the world. The sixth plane is the next lower vibration, where union takes place and the change from negative response to positive action is manifest.”

These words of Uranda lead naturally into our next meditation, the Pituitary Gland. But first let us give brief consideration to the Hypothalamus and the role it plays with these two sacred energy centers. . . .

You’ll have to read my book for an ongoing meditation on these sacred aspect of your anatomy.  Until my next post,

Be love, be loved,

Visit my website at healingandattunement.com and my Health Light Newsletter blog at liftingtones.com.

Significance of the Pineal: The Seventh Angel’s Trumpet

Dawn Of A Golden Age

Comments on: "Significance of the Pineal: Galactic Orientation" (1)