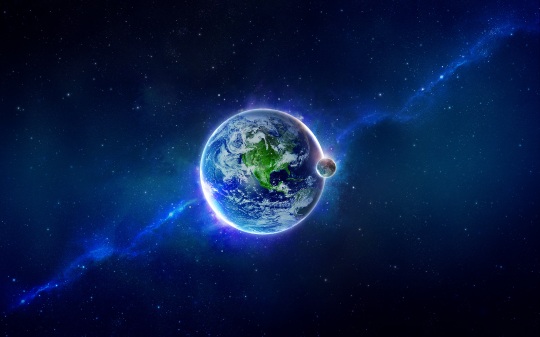 Our Home among the stars
(click on image to enlarge)
While this image is dramatic, the moon is actually more than 1/4 the size of Earth

The word apocalypse means revelation. It implies an unveiling of something already present only hidden.  It has nothing to do with tragedy or some cataclysmic end of our world.  In this blog post and the next, I will propose and present what I will call a revelation of light, of angelic light, the Light of the One we each and altogether are and differentiate into its many colors of expression and culture on Earth. I will call that One the “Archangel” by reason of the collective and diversified nature of the One.

To recap a bit on the theme of this blog series, in their collaborative book The Reincarnation of Edgar Cayce—from which I have been excerpting passages in this series—Wynn Free and David Wilcock present a scenario that has Earth and her inhabitants making a “dimensional shift” to a “Fourth Density” within the cosmic context of the Milky Way Galaxy.  This is what all the excitement is about as we approach the Winter Solstice of 2012, the end of the Mayan Long Count Calendar and the beginning of the Age of Aquarius, the cycle upon which Wilcock bases his cosmology.  According to Wilcock’s extensive research, we are at the end of a 75,000 year “planetary cycle,” which is divided into three shorter 25,000 year planetary cycles.  We are moving forward into the fourth 25,000 year cycle, and radical changes are a foot and at hand for the planet and all its inhabitants.

As Wilcock’s prophecies see our future and the cycle now unfolding, this dimensional shift  from a third-density to a fourth-density planet entails a radical transformation for human beings and the planet upon which we live. In order to be able to live on Earth after the planet makes its transition and dimensional shift, our bodies need to shift to a higher vibrational frequency, since a third-density body will not be able to survive on a fourth-density planet.  Since our bodies and world arise out of consciousness, ascension of human consciousness is the first order of business.

From my perspective, that has been happening for the past hundred years at an accelerated pace as spiritual emergence has erupted in human experience.  It is as though spirit beings from higher dimensions have indeed incarnated on earth for the sole purpose of lifting human consciousness to a higher density and level of awareness.  Human flesh itself is being given the opportunity to ascend to the Fourth Dimension.

The physical body is but an extension of the spirit.  When it is time for the calling up of those upon your plane to higher frequencies, your body is going to be a part of the past, and your energy body a part of the future. —Ra/Wilcock, August 12, 1999

In a word, our incarnating capacities are thinning out, becoming less dense and, therefore, more transparent, allowing for the revelation of angelic light through human flesh.

This is a huge event in human history—and the mainstream media are totally in the dark about it, as it should be perhaps.  The knowing is an internal one of discernment.  Spiritual things are spiritually discerned.  Wynn Free passionately offers this assurance:

However, once we understand what is happening to us, we don’t need to be afraid of it.  When the Earth fully moves into the fourth-density energy, we will naturally he transported into a higher level of our own being.  Our physical body becomes irrelevant at that point.  We are much more than that.

If you’re very attached to your physical body, you might say, “Well, what would I be without it?” You might see this as traumatic, but in fact your experience could be looked upon as Soul graduation. People are saying, “I’m doing my spiritual growth. I’m doing my path. I’m walking in my truth. I’m trying to grow spiritually, I’m trying to evolve.” Evolve into what? Grow to what? Are you just going to keep reincarnating over and over again as humans? No.

Is the Earth going to remain in this vibrational level where human beings will blow up bombs, poison its waters, pollute its atmosphere, kill its creatures, and cut down all the trees? No. The Earth is not expected to go through this.  The Earth is an evolving being, too.  The difference with the Earth, unlike a regular human lifetime, is that it goes through a very premeditated, very obvious course of its evolution. As it orbits around the Sun, and as the solar system orbits around the galaxy, the extraterrestrial races that are in higher dimensions know exactly when these changes are going to happen.  That’s why they’re here now, because basically they’re aware that this is going on and are standing by to assist us.

For those who are ready to handle the vibrations, their physical bodies will be transformed into a higher density of vibration when the moment of change arrives.  So it’s not as though there’s going to be all these fried corpses lying around.  When the energy hits you, you transform. Your body will actually transmute itself, like what happened to Jesus—Ascension.

There is a parallel in the Shroud of Turin, where certain researchers have found that Jesus’ body burned a complete three-dimensional image of itself into the cloth.  And they found through experimentation that such a burn could only be caused by an instantaneous blast at a very high temperature, “zapping” the cloth like an X-ray film.

It would be so easy to miss this fantastic opportunity to participate in the evolution that is happening here and now on our planet.  The media [and I would say human beings at large] are bent on creating a reality where our happiness is contingent on the acquisition of new products.  We seek the best jobs and the highest status as we succumb to the mass illusions of “consensus reality” and “winning the game.”

Each of us has the choice to create our lives so that we may participate in the Utopian world that will manifest on Earth after this Ascension process has completed—a world without poverty, hunger, or pain; a world where full-body levitation, spontaneous healings, instant telepathic communication, and abundant Love are the law of the land.

The energy “hits us” from within, not from without, from above not from below—as above so below, as within so without.  The energy shift of our natural world and planet will make it possible for our bodies to sustain their vibratory shift, transmutation and transparency.

With conditions as they are now vibrationally, and have been for millennia, those who have gone through a process of ascension, including Jesus, could not remain in this third-density world. Nor could they ascend into higher dimensions with their third-density bodies.  Their bodies transmuted from one level to the next as they ascended up and out of sight of those who stood around, such as Jesus’ disciples.  Jesus was said to have “parted from them and carried up into heaven” by the apostle Luke (24:51).  He went into a vibratory level that could not be penetrated or perceived by the lower levels of energy, as the higher densities of energy penetrate the lower, but the lower densities cannot penetrate the higher.  Another way this was put is:  “And the light shineth in the darkness, but the darkness comprehended it not.”  Again, we cannot grasp these things with our third-density human minds.  Only with our hearts, which perceive spiritual essences because the heart is of a finer vibratory substance.

This is what is afoot and at hand for us all.  And we came here to see it through to completion for our Lord and King.  We volunteered for the mission as “Wanderers” from our various densities and dimensions in our Father’s House of many mansions. I will continue with this theme in my next post, “The Wanderers.”  Until then,

Visit my LiftingTones.com blog to read my Health Light Newsletter. The series consideration is “Understanding Fibromyalgia: The Chronic Stress Factor.”

Welcome Sudan and Moldova!  Welcome Bosnia!  And Costa Rica! And Poland! Welcome all!