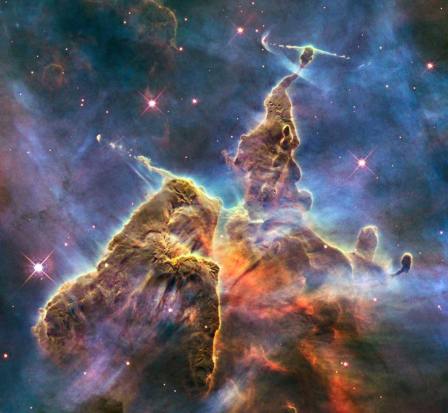 “When I consider thy heavens, the work of thy fingers, the moon and the stars, which thou hast ordained; what is man, that thou art mindful of him?  and the son of man that thou visitest him? For thou hast made him a little lower than the angels, and hath crowned him with glory and honor.” (Ps 8:3-5)

I LIVE IN AWE of the order and harmony in this vast Universe, and I love  contemplating the design of things, both physical and vibrational, and by what power and force they function and move about—like how do the yellow purslane in my wife’s flower beds know when the sun rises and sets so they can open and close with its rhythm and timing?  Mysteries such as this give me a sense of wonder at the magic of Nature.  It’s in my karma, I suppose.  I’ve done it before in prior incarnations and I’m doing it again in this one.

When I first met my spiritual mentor, Lord Martin Cecil, the Fifth Marquees of the House of Exeter in England, in 1968, my heart was split wide open and my mind lept for joy with what I was hearing him articulate.  For eighteen enlightening and engaging years I sat at his banquet table feasting on every marcel of clarifying truth that trumpeted through his resonant voice, and learning how to live them.  Those were transformative times. Today I find deeper understanding of what he brought forth in his plethora of services when I revisit them.

In 1979 he gave a rather in-depth and detailed consideration of the design, both physical and spiritual, or vibrational, of planet Earth.  Borrowing the transcription from my friend David Barnes’ blog The Great Cosmic Story, I published excerpts of it on my blog in increments starting in June, 2020 and took it up again in my post of July 19th, 2020.

In his presentation, Martin speaks forthrightly to incarnate angels everywhere who are emerging in an apocalypse of light, speaking truth to power and handling situations in the world with assurance, integrity and spiritual authority.

For a comprehensive appreciation of the consideration, I recommend that you take the time to visit these two posts and read the excerpts before reading the one I am reposting here.  I am publishing here the portion of Lord Exeter’s consideration taken from my post of July 25, 2020 for meditation.

As before, read his words with an open and still mind and quiet heart. Open to the current that weaves truth and wisdom through them.  It’s in the heart where spiritual essences are discerned and understanding occurs.

“Transmutation with Regard to the Total Earth” (continued)

We have been considering the resurrection. The womb may be said to be the means by which life is born. The substance of love was first necessary if there was to be the substance of the womb. There is nothing else but love substance, all the way through—love substance but at different vibratory levels. And the substance of the womb is the heaven in relationship to the life that is to be born. We find at every level there is a heaven involved—a connection. You may remember that the second day of the creative cycle described in Genesis spoke of the firmament, the heaven, the connection between the waters above and the waters below, between the truth above and the truth below—the means by which what is below may be brought forth. The heaven at any level is rightly a state where there is a particular atmosphere and a particular enfoldment and a particular control, by which the creative process may continue. All that indicates the presence of what is called truth. So there is a heaven connecting the substance of love above with the substance of life below. There is one heaven.

We may also see that this total area is the Triune Heaven relative to this area here—what we have called the Triune Earth. What is above is spirit, present in the dimensional world, and the fourth, the level of the heart, represents the connection, the heaven, between what is above and what is below. What is below is the Triune Earth—we could look at them as spheres, which gives them another dimension, one inside the other. The visible earth is at the center. Insofar as physical vision is concerned, that is the only one that is visible. All the others are invisible. And if we were looking at the planet earth we might recognize the fact that it is much larger than the physical ash at the center. It could extend out to about the orbit of the moon. The human view of things, which is based in involvement with externals, always emphasizes the lowest level, so that the earth, the planet, is thought of as being the thing—but it’s only one seventh of the thing. I’m not saying that all the various concentric spheres are regularly the same amount bigger than the one inside. This is merely a diagram of something. But here is a whole. The waters above connected with the waters below by the sphere represented by form, which relates to the substance of the heart—the pure heart, if the creation is as it should be, the pure heart which is the window through which what is above can shine into what is below and therefore be present relative to what is below. It all is there back of what is below—it all permeates what is below. But if the fourth sphere is dense, cloudy, then the larger spheres are not known relative to the smaller spheres in the middle, relative to the earth and to human nature. So the concern is that this veil should be dissolved, the clouds should be dissolved, so that it all may be known as One. The smallest part of it is the earth. The smallest of us is our physical bodies. There is much greater stature than that. Now we see the earth as quite a large planet in fact, relative to the physical earth—much larger than the physical earth. However even if it is as large as the orbit of the moon in fact, that is very small still relative to the size of the solar system. So here we begin to see the symbol of largeness in one direction and smallness in the other direction.

Now this heaven, which includes the realms of what we call spirit in the dimensional world—seven, six and five—is the cool place, where there is a temperate atmosphere. It’s a comfortable place for angels to dwell. And it is a place of control—this is the kingdom. As the connecting sphere becomes a window through which the nature and quality of heaven may shine, it emerges into the three lowest spheres as the fire of transmutation. In other words, the hot place is the Triune Earth. Here is where the fire is burning in order to transmute the substance, beginning with the physical substance of the earth, into substance of a higher vibratory level. Here is the returning aspect of the cycle—ascension, something moving up. There is the process of transmutation at work in the earth. This is the primary level of where the transmutation is occurring, so that there may be a movement upward, not as though the earth was going someplace—that might not be the concept with respect to the earth but it has been in Christianity. The physical earth is supposed to pop up out of the graves and go to heaven someplace.

But there is no movement in fact in this fashion. It is a transmutation of the substance exactly where it is, not someplace else. And what is occurring may be said to refine—a refiner’s fire by which the substance is refined and changes its nature. We can see this in a very elementary way: the changing of the nature of the mineral earth as it is lifted into the bodies of living forms, whether vegetable or animal or whatever. The substance of the flesh of your body is different to a model of your body made in marble. The flesh of your body and all its various parts are composed of entirely different substance—it’s a different quality, a different nature. So there has been that much transmutation in the experience of your own physical body from the mineral level—something has been happening. It is assumed that it is in the nature of a circle: the substance is just lifted up into your physical body, it stays there for a while, and then bang, it collapses down into the mineral kingdom again. This is not exactly the way it works now, in fact, but it certainly is not the way it was designed to work in the original creation—it isn’t a circle. There is a continuing movement upward, and whatever has been sufficiently refined to move to the higher level moves to the higher level. And what is not capable of moving to the higher level drops down to the lower level, so that it may be acted upon again by the creative fires in the refining process, and gradually it is lifted up. There is less and less left in the way of ash and more and more moving in the ascending spiral.

There is a transmutation occurring with respect to this total planet, not just with respect to the earth aspect of it, which is the very smallest aspect. There is something happening with respect to this total planet—a movement upward; an ascending cycle is at work. But since man left his position it has been a very slow and limited process. Everything has been at a standstill virtually. It is not working the way it should—only partially so—and very little has occurred since man fell of the true creative process. It couldn’t, because there was no man in place to let it happen. This outlines something which is incapable of being encompassed by the human mind; but it is something that is happening, whatever words may be used to describe the process, of which it is necessary to become increasingly aware. Here is something actually occurring with which we are associated. If we tend to sort of blot it out of our experience with the idea that mentally speaking we can’t grasp it, then we certainly can’t participate in a way that is going to be of any value in the process itself, for which we carry a very definite responsibility.

As angels we carry that responsibility, and we are here to let that responsibility be fulfilled. As we move together these things naturally will clarify themselves to the extent that we are willing to let it be so, willing to let the Word of God be spoken in our own individual and collective experience. There is the ascending cycle at work, even though it isn’t working the way it should work. It is limited and restricted, and a lot more is descending than needs to descend in the true state.

How simple and simply wonderous is the Creator’s design for our home among the stars. The heavens and the Earth, the invisible and the visible, are inseparable one.  The last paragraph of this consideration holds the key to how the process of transmutation of the total planet unfolds with our participation.  As always, I welcome comments from my readers as I enjoy and value others’ thoughts along these lines. Until my next post,

Steps of Ascent 5: The Way of the Master

Steps of Ascent 4: How much can we bear?