Transmutation is by the unified radiation of love.  In this post I will push the envelope a bit to contemplate further the process of transmutation and ascension.  We have completed the process of transformation of consciousness sufficiently to move on to what’s next. I will share a presentation by contemporary spiritual teacher Lord Martin Exeter (1909-1988), whom I was honored and privileged to know as my mentor in transformation—words that may bring to remembrance the commission we signed up for as angels before incarnating on Earth. I will share a part here and another part next weekend.  I started sharing this consideration in a blog post back in June.  If you haven’t yet read that excerpt, it will help in understanding this one, as it flows from the other. He was speaking about true angelic stature, and then moved into a consideration of the transmutation of the total earth, the earth of our planet as well as that of our physical body.

As Lord Exeter points out toward the end of his presentation, the mind is incapable of comprehending how this process plays out.  However, as he emphasizes, it is something that is occurring with which we are associated, and as angels it is necessary that we become increasingly aware of it, as we have a responsibility to participate in the process in a meaningful way.  In other words, we can’t just blow it off as something the mind simply cannot comprehend.

As we know, there is a Creative Process, and we—Man, male and female, made in the image and likeness of God—are created with capacities that equip us to participate in creation.  How can we participate in creation unless we know what is actually going on within the context of the ascending and descending cycles of the creative process. We can’t as long as we are distracted by and preoccupied with the problems in our mind-made world.  From the Creator’s standpoint, these problems are insignificant.  They are simply the outworking of cycles set in motion by self-centered, self-active humans who are bent on consuming the earth and her resources expending minimal effort replenishing them.

The world we have created is not much different from the world that was destroyed by the Great Deluge of Noah’s day.  We have multiplied flesh upon the face of the earth and polluted our world beyond the point of return to healthfulness.  And now we are “at war” with a virus that is changing our way of life and threatening our economy and our very existence, taking out the inflicted on an hourly basis.  From the standpoint of an over-crowded planet, this may be Mother Nature’s way of reducing the population, albeit by a very small fraction relatively speaking.  From one viewpoint, it may be a “harvesting” of souls—reminiscent of what was foretold in the “RA Material” that both Edgar Casey, and today David Wilcock, have delved into and published research on—(a brief review of which I will include later in this series).

Jacob’s “ladder” reaching up to heaven from the earth is busy with angels ascending back Home with others descending to don infant forms created by our runaway species.  Abortion may well be a Godsend, allowed because of the “hardness of men’s hearts,” the same reason divorce and remarrying among the Israelites was permitted by Moses.

Who is to say abortion is not a divine intervention to put a rein on the number of people populating this relatively small planet?  Religious groups who object to abortion may well be going against the Creator’s efforts to stem the tide of Earth’s population explosion, and the flow of angels descending to incarnate, thousands of them finding their earthly destinations terminated and having to return to the realms of light.

How many of us ever think about this, the dilemma we may be creating here on earth for the Creators responsible for maintaining a balance in this world between occupancy and sustainability without imposing on our freedom of will and choice?  In an orderly Universe where design and control are essential patterns in the creative process, do we not imagine that there are just so many angels assigned to this planet simply due to its size?  Seven-billion seems to be about right, as we started being over-crowded and an exhausting drain on our natural resources shortly after passing that mark just a few decades ago.  Even seven-billion self-centered humans unconscious of their angelic presence are too many.

And we squabble with one another over racial discrimination and economic disparity in the midst of the impending collapse of our uncivilized world, dubiously grateful for a common viral enemy uniting us, though not for long as people rush to get back to “normal “ and “business as usual,” neither of which appear likely.

When will we as a race of human beings begin seeing what’s occurring on Earth from the Creator’s viewpoint above Creation?  See what’s actually going on from a heavenly perspective?  It’s finished.  Game over.  Time to stop playing children’s games and get back to the real mission for which we as divine beings, angels of light and love each one, signed on, part of which relates to the process of transmutation and ascension already occurring and has been from day one, only it’s wanting to move on to a higher and finer vibratory level.  It needs our conscious participation.

This is what Lord Martin Exeter offered to the awakening world some forty-one years ago and addresses in this excerpt: a view from above—or from within, depending on one’s viewpoint.  Take the time, be still, and let the current moving through his words be received into your heart, where alone true understanding is possible.  It’s in our hearts where we are being given understanding of these things so that we can participate in the creative process in a meaningful way.  Listen with a still and open mind and heart.

“Transmutation as it Relates to the Total Planet”

So there is this largeness in the representation of God in one’s own experience but smallness in representing the people to God. There is always humility before God. This obviously is representing the right attitude of the people toward God: you are humble before God, you are very conscious of your insignificance in God. But the fact of insignificance in God, because God is so limitless, in no way denies your stature in the world. We have that stature, we are responsible for it. This is related to the upward view and the downward view. There is another way this is sometimes considered—the inward view and the outward view. Now we can see how this inward view, when people look in, there is a tendency for them to think that they are looking toward something rather small. And when we look out it’s this vastness—we live in a big world, and that big world goes on and on and on in a vast universe. We think of the largeness therefore as being external and the smallness internal, which, from our previous considerations, you can see is just the reverse of the fact. The smallness is external, the largeness is internal. 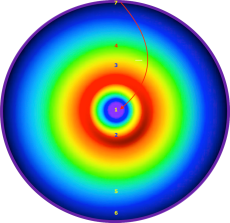 Let’s start with the smallness of the physical level of things. This is the smallest part of the whole. When looking into the universe, the physical substance in the universe fills a minute fraction of the total space. In other words the physical substance is the smallest aspect of the universe. Let us look at this little circle here as representing this planet, the earth, numbered 1. Relative to the total circle, the earth at the center is very small. We have seen that the substance of love in its pure essence fills and encompasses the whole dimensional world. At the moment we are looking at it from the standpoint of the planet earth; or we could look at it at the same time from the standpoint of our own physical bodies, represented by that little core numbered 1. The outermost circle represents the undifferentiated substance of love that is present everywhere from the circumference to the center. Every level illustrated by the circles that I have drawn is back of that first level. All of the levels therefore are present relative to that little circle at the center—that is the place where the substance is richest—all the levels are there. That is the only place where all the levels actually are. Each level permeates the level below it and extends beyond it, and this is illustrated here. So do not let us think of the seventh level, the substance of love, as merely being a little strip around here. It isn’t—it’s right from here to the center. It’s all‑inclusive. 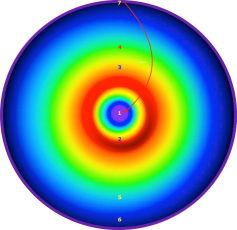 We have noted that the level of the womb, numbered 6, could be said—if we are considering the creative process—to be the residue which was of such a nature that it couldn’t remain in the pure essence of the substance of love. In the creative process, fire is used as a symbol of what occurs. When a fire burns, ash remains; there is a residue remaining. As the fire burns in the pure substance of love, there is that which naturally falls into the next lower vibratory level, so that each subsequent level, as the fires burn, is the ash relative to the one higher, until we come finally down to the earth itself, which is the residue of everything that has happened in the creative process. We can see something moving, coming down from God in the creative process, but it isn’t a one‑way street. There is the working of the creative fires and the residue which results therefrom. But when the whole thing has been done and these various layers of residue are there, is the creative process going to quit? What would be the point? You just have a lump of something. It doesn’t work merely in one direction, even from the very start. There is what is represented by Jacob’s ladder, something ascending and descending. It’s all going on at the same time. There is a provision for ascension, so that the ash may not remain as ash.

We see something of this from the standpoint of the earth, the planet. Clearly there is a means here on the surface of the earth by which a transmutation is taking place. The mineral substance is being lifted up into what are considered to be animate forms of various sorts. There is an ascending process occurring. Substance is being lifted, the ash of the earth is being lifted into other configurations. As it is lifted the nature of the flesh of the earth, which was before seemingly an inanimate mineral, now becomes something else, much more resilient and flexible, and the forms into which it is lifted become progressively more complex. Here is some evidence, at the initial level of transmutation, of what may be called ascension, the means by which substance is being resurrected so that it need not remain ash. This cycle of ascension is going on and we have a responsibility in this area.

One can see, after reading Lord Exeter’s, words, what is required of us if we are going to take on this responsibility.  For one thing, an elevation of our consciousness to a level well above where it was forty-one years ago when he opened up this consideration; and, most important, being present and conscious as angels.  I will continue along these lines in my next post.  As always, I welcome comments from my readers and enjoy sharing others’ thoughts along these lines.  Until then,

Be love.  Be loved

Comments Off on Transmutation of Planet Earth, page 2: Beyond Transformation

Transmutation of the Earth, page 1