Our Spring concert this year, “Spirits of Wisdom and Unity,” features FEEL THE SPIRIT — seven spirituals by John Rutter: Joshua fit the battle of Jerico, Steal away, I got a robe, Sometimes I feel like a motherless child, Ev’ry time I feel the spirit, Deep River, and When the saints go marching in — and Song of Wisdom From “Old Turtle,” music by Joseph M. Martin, based on the book “Old Turtle” by Douglas Wood. It’s a powerful story and musical arrangement.

The Masterworks Chorale of the Louisiana Choral Foundation will be in concert this coming Mother’s Day weekend: Friday May 9 at 7:30 pm. and Sunday May 11 at 3:00 pm.  The venue is St. Luke Simpson United Methodist Church out on Country Club Road in Lake Charles. Come and enjoy some beautiful and deeply moving  music.

Here’s the story of “Old Turtle”

Once, long long ago . . . yet somehow, not so very long . . . when all the animals and rocks and winds and waters and trees and birds and fish and all the beings of the world could speak . . . and understand one another . . . There began . . . an argument.

It began softly at first . . . Quiet as the first breeze that whispered, “He is a wind who is never still.” Quiet as the stone that answered, “He is a great rock that never moves.” Gentle as the mountain that rumbled, “God is a snowy peak, high above the clouds.”

And the fish in the ocean that answered, “God is a swimmer, in the dark blue depth of the sea.”

“No,” replied the ant, “God is a sound and a smell and a feeling, who is very, very close.”

“God,” said the antelope, “is a runner, swift and free, who loves to leap and race with the wind.”

“She is a great tree,” murmured the willow, “a part of the world, always growing and always giving.”

“You are wrong, ” argued the island, “God is separate and apart.”

“God is like a shining sun, far above all things,” said the blue sky.

“No, He is a river, who flows through the very heart of things,” thundered the waterfall.

“She is a hunter,” roared the lion.

“God is gentle,” chirped the robin.

“He is powerful,” growled the bear.

Now, Old Turtle hardly ever said anything, and certainly never argued about things like God. But now Old Turtle began to speak.

Old Turtle had never said so much before. All the beings of the world were surprised, and became very quiet. But Old Turtle had one more thing to say.

“There will soon be a new family of beings in the world,” she said, “and they will be strange and wonderful. They will be reminders of all that God is.  They will come in many colors and shapes, with different faces and different ways of speaking. Their thoughts will soar to the stars, but their feet will walk the earth. They will possess many powers. They will be strong, yet tender, a message of love from God to the earth, and a prayer from the earth back to God.”

And the people came.

But the people forgot. They forgot that they were a message of love, and a prayer from the earth. And they began to argue . . . about who knew God, and who did not; and where God was, and was not; and whether God was, or was not.

And often the people misused their powers, and hurt one another. Or killed one another.  And they hurt the earth. Until finally even the forests began to die . . .and the rivers and the oceans and the plants and the animals and the earth itself . . . Because the people could not remember who they were, or where God was.

Until one day there came a voice, like the growling of thunder; but as soft as butterfly sneezes,

The voice seemed to come from the mountain who rumbled, “Sometimes I see God swimming, in the dark blue depths of the sea.”

And from the ocean who sighed, “He is often among the snow-capped peaks, reflecting the sun.”

From the stone who said, “I sometimes feel her breath, as she blows by.”

And from the breeze who whispered, “I feel his still presence as I dance among the rocks.”

And the star said, “God is very close;” and the island said, “His love touches everything.”

And to see God in one another . . . and in the beauty of the earth.

And so did God.

I hope you enjoyed the story as much as I enjoy singing in this concert. Until next we meet,

Picture credit: Watercolors in the book and copied here are by Cheng-Knee Chee

Someone in Mauritius just looked at my blog, bringing the number of countries visiting my blog to 117.  Welcome visitor! I looked up your home Mauritius and see that it’s a beautiful island West of Madagascar with an “underwater waterfall.”  Here’s a picture of the island. 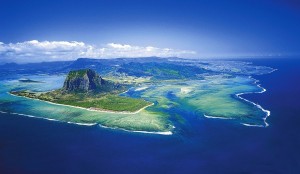 Comments Off on “Old Turtle”

The Body Electric, part 5: — Of Angels and Archangels

The Essenes, “Children of the Light,” Part 1